Clive Sparkes, who runs Go Glass, in Cambridge, has created a two-metre high sculpture of a runner which he is auctioning for CLIC Sargent, the UK’s leading cancer charity for children and young people, and their families.

The sculpture depicts the runner crossing a finishing line with the slogan “Pushing the Limits”.

As well as wanting to create a striking piece to support CLIC Sargent, the theme was also inspired by Clive’s sister Tracy Saunders also a Director at Go Glass, who had her leg amputated after a cycling accident in 2011. She had been cycling to work in 2011 when she was crushed under the wheels of a lorry at a roundabout.

Clive, who is also a keen athlete and has completed triathlon and Ironman events, said: “My passion for glass etching along with ironman training and my sister’s struggle to deal with losing a leg led to my sculpture ‘Pushing the Limits’.

“It’s also a great chance to raise some money for CLIC Sargent, a charity which pushes itself to the limits in its support for children and young people with cancer.”

Clive first started competing in triathlons about five years ago and has since become an “Ultra Runner” taking part in Ironman triathlons (which involve a 2.4 mile swim, 112 mile bike ride and 26.2 mile run) and running 80 miles in a day this year.

He said: “I feel keeping the muscles guessing and ready for whatever you throw at them sets you up for triathlon. I also love encouraging others to improve. I know we all race alone but it’s important to train together whenever possible.”

This is the third time Clive has designed, created and auctioned a sculpture for CLIC Sargent after producing a glass Formula One car and racing bike in CLIC Sargent Fundraising Manager Karen Roberts said: “We are so impressed by Clive’s amazing sculpture. It is not only a great example of his detailed glass work but also has an inspiring message of encouragement about pushing to the limits.

“We’re so grateful for all Clive and Go Glass have done for CLIC Sargent. Funds raised from the auction will go towards the work the charity does for children and young people with cancer, and their families, including providing grants, nurses who visits homes and schools and social workers who provide vital support when lives have been turned upside down.”

Clive is hoping a company or running group will be interested in bidding for the sculpture to use the piece as inspiration.

To bid in the auction visit http://www.goglass.co.uk.  The auction ends on February 28 2016 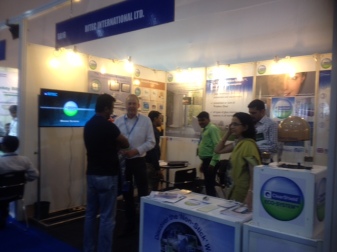 Ritec India showcased the new ClearShield Eco-System at the Glass Technology Expo in Mumbai last week to high visitor acclaim. The Ritec India team from Roshnak Surface Care Systems demonstrated how the ClearShield Eco-System™ for glass renovation, “non-stick” protection and maintenance gives glass processors, fabricators and installers the competitive edge by being the first and only technology with performance, added value and profit guaranteed at every step of the glass supply chain. As anticipated, interest from processors, fabricators, contractors, installers and shower companies was high.

Visitors were shown how the ClearShield Eco-System™ transforms new or old glass into a higher value product with low-maintenance performance, resulting in diversification leading to higher sales. Customers do not have to stock a new type of glass as Ritec’s simple added-value package enables unprotected glass to be upgraded into ClearShield Eco-Glass™ in the factory.

“The Glass Technology Expo in Mumbai proved a great success for Roshnak Surface Care Systems, with a fantastic reception to our ClearShield Eco-System™. We are delighted to have been a part of something so prominent to the glass industry and to have the opportunity to meet so many prospective customers. If you were unable to come along to the show but are interested in what we showcased, please contact us and we’ll be delighted to discuss it with you.”

Innovative systems for the renovation, 'non-stick' protection and maintenance of glass and other surfaces including Stainless Steel and Aluminium.